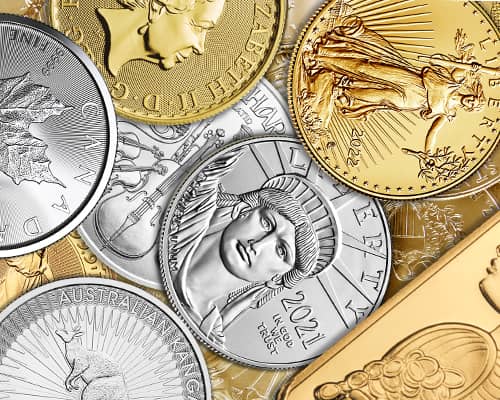 Bullion coins are physical coins made of precious metals. The most common are gold and silver, but platinum and palladium are also used to invest and hedge against inflation. Investing in precious metals and bullion coins requires understanding their advantages, disadvantages, risks, and rewards.

Bullion coins are highly refined precious metal products that are circular (as opposed to the rectangular shape of a bullion bar) and produced to exact specifications by numerous sovereign governments worldwide, specifically for investment purposes. These coins are produced in large quantities and come in various sizes – typically one, one-half, one-quarter, and one-tenth troy ounces. Their content – measured by the weight and purity of the precious metal they contain – is guaranteed by the governments that produce them. Also, they are attributed legal tender status in their country of origin but are valued in the market for their precious metals content.

South Africa introduced the first investment bullion coin – the gold Krugerrand – in 1970. Since then, many more countries began to produce their own series of gold, silver, and even platinum and palladium bullion coins, including the United States (American Eagle), Canada (Maple Leaf), Australia (Kangaroo), Austria (Philharmonic) and China (Panda), to name a few. For example, the United States Congress directed the U.S. Mint to produce the American Eagle Gold and Silver bullion coins in 1986 and later, the American Eagle Platinum bullion coin in 1997, followed by a palladium coin, first issued in 2017.

Bullion coins with legal-tender designations are bought and sold in the precious metals marketplace daily and trade at values reflecting their precious metals commodity content rather than the face-value designation. They do not circulate in any of the world’s national economies, nor are they commercially used as money or as a medium of exchange. Bullion coins are commonly stored in gold vaults or precious metals depositories for safekeeping.

What are Bullion Coin Premiums?

Today, bullion coins are widely traded as a form of precious metal commodities throughout a worldwide system of international bullion banks, dealers, and retailers, and their market values – which change constantly. Though credited legal tender status by the governments that mint them, bullion coins trade in the marketplace at a modest premium or the additional price charged above its spot price, or the overall value of its precious metals content. That premium reflects the costs of production, insurance, transportation, and handling. It also accounts for the manufacturer’s and the selling dealer’s revenue. Thus, their actual market value bears no direct relationship to what a given coin’s assigned legal tender or face value may be.

This premium is not a value given to the bullion coin due to any scarcity or uniqueness considerations, as is common for collectibles or rare coins. Bullion coins are typically manufactured in large volumes by federal governments to specifically ensure they generally do not become rare or scarce and remain common. The goal is to make their minted bullion coins as common as the bars or ingots many commercial refiners produce for investment purposes. However, some of the fractional gold eagles minted by the U.S. Mint carry much higher premiums because of their low mintage. These escalating premiums can develop over time. So, while these were produced as bullion coins by the Mint, premiums have risen due to real or perceived scarcity.

Advantages to Investment in Bullion Coins

There are significant advantages for investors who want to own physical precious metals by purchasing depository assets such as bullion coins. For example, since they are produced and guaranteed by federal governments, bullion coins are universally recognizable by bullion and coin dealers and many bullion banks worldwide. Thus, they are highly liquid and immediately tradable without the need for a costly and time-consuming assay, as may be required for some bullion bars and ingots.

To learn more about one of the leading precious metal depositories in North America, call 800-375-465, Monday-Friday, from 8:30 am to 5 pm Central Time.